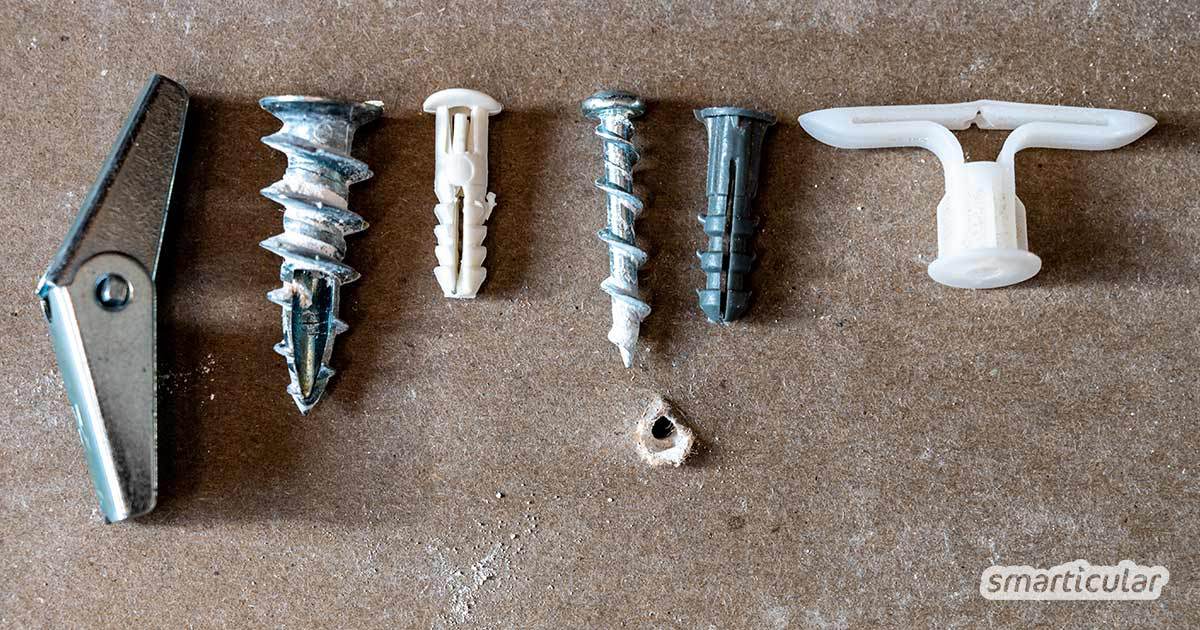 Dowels ensure a secure hold between the wall and the screw. But as much as we are happy about a bombproof assembly, it can be just as nerve-wracking to get it out of the wall again at a later point in time. Here are our tips on how Remove dowels to let.

These methods are primarily suitable for removing universal dowels, so-called plastic expansion dowels. An overview of other types and tips on how to remove these anchors from the wall can be found below.

Dowels can be removed from the wall with the following tricks:

1 Remove dowel with a screw

If you want to remove an anchor from the wall, you first use this method: Screw a suitable screw into the anchor until it finds a hold and then simply pull on it with your fingers or pliers. Voila!

Flat-nosed and needle-nose pliers are at least as efficient when removing dowels. You can use them to grab the edge of the dowel and pull it out of the drill hole with slightly jerky movements.

3 Remove the dowel with a corkscrew

4 The last resort: Drill out the dowel with a drill

If trick #3 does not succeed in removing the dowel from the wall, there is still the option of drilling out the plastic dowel. For this you need a drill or a cordless screwdriver and a suitable metal drill attachment in the diameter of the drill hole. Place the drill on the drill hole and mill out the dowel at low speed.

What types of dowels to remove

In addition to universal dowels, which you can get out of walls using the tricks mentioned above, there are other types of dowels that are used in the case of non-solid walls. The assembly principle of these anchors differs from that of the universal anchor.

Plasterboard dowels made of plastic or metal are used for plasterboard walls. These dowels do not spread out, but consist of a snail-shaped externally threaded sleeve that cuts into the ground when screwed in. Plasterboard anchors can be removed with just a screwdriver.

Snap or toggle bolts are used for mounting on walls behind which there is a cavity. They are inserted into a pre-drilled hole and have a folding or tilting mechanism that anchors part of the plug behind the wall/ceiling panel. This mechanism is irreversible. As a rule, however, these anchor types are used with a threaded rod that can be unscrewed for dismantling. The tipped-up part of the dowel remains in the ceiling or falls behind the wall.

So-called hollow metal dowels are characterized by several parallel spreading arms, which – when a screw is turned through the dowel – buckle and anchor themselves behind drywall. To remove such dowels, it is necessary to unlock their mechanism:

The screw is replaced with a longer screw that protrudes at least two centimeters from the wall when fully tightened. Use a hammer to drive the screw into the wall. In this way, the spread arms pull together again so that the dowel can be removed from the wall.

Have you developed a taste for DIY? Then do more things yourself! You will find many practical ideas in this book:

What other ways or tricks for removing dowels do you know? We’d love for you to share your experiences with us and the community by commenting below the post!