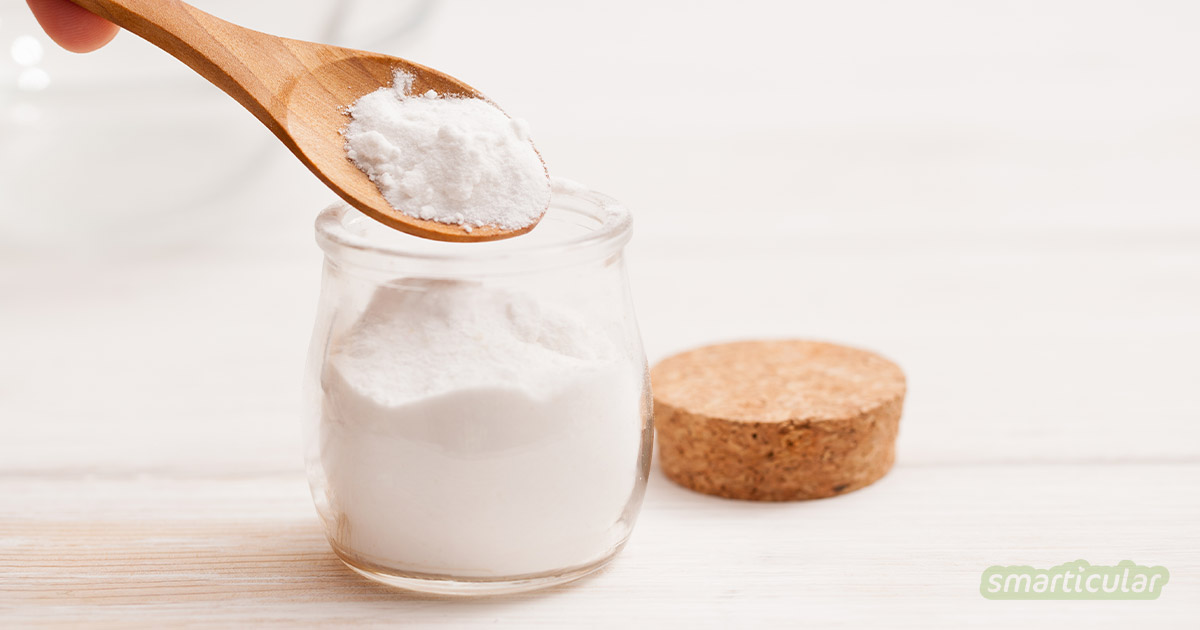 Baking soda is one of the most versatile ecological home remedies because you can’t just use it for cleaning! The mild soda powder has also proven itself in nutrition for a long time as a component of baking powder and for making food more digestible. The healing properties of baking soda can be used in tinctures and scrubs, baths and much more. What baking soda is and how it worksyou will find out in this article.

Here you will find the most important information about the inexpensive all-rounder that should not be missing in any household.

What is baking soda?

Soda is the common name for the sodium salt of carbonic acid. In chemistry it has the name sodium bicarbonate or sodium bicarbonate (obsolete) and the molecular formula NaHCO3. It occurs in nature in small amounts as a natural mineral, but in Europe it is mostly obtained from common salt using the Solvay process. Baking soda is commercially available as a coarse or fine white powder, often by the name Emperor Baking Soda.

Baking soda is approved as a food additive under number E 500 ii and is sometimes also food soda or baking soda (as a 1:1 translation of the English term baking soda) called. However, it should not be mixed with “real” soda (chemical sodium), also known as pure soda or washing sodabecause soda is not suitable for nutrition, personal care and healing applications because it is too spicy.

The differences between baking soda and soda are described in more detail in another post.

How does baking soda work?

Among other things, baking soda softens water and has an antibacterial and astringent effect, which can be used primarily in nutrition and personal hygiene. However, many of the effects of baking soda can be traced back to the reaction with various acids:

In another article you will learn more about the chemical background of baking soda.

The effervescent reaction of basic baking soda with an acid that produces carbon dioxide gas is used, for example, in baking with baking powder or a homemade baking powder alternative to make the dough fluffy. Every baking powder consists of baking soda and an acidifier.

The same principle also works when cleaning drains, when the resulting CO2 shakes up stubborn deposits so that they can then be flushed away more easily.

The fact that the basic soda neutralizes the effect of acids can also be used in many ways: odors are caused, among other things, by acetic and butyric acids as well as by hydrogen sulfide and ammonia, which are broken down or neutralized by soda, for example with a home-made textile spray, a room spray , as an upholstery cleaner or in a self-made roll-on deodorant with baking soda. 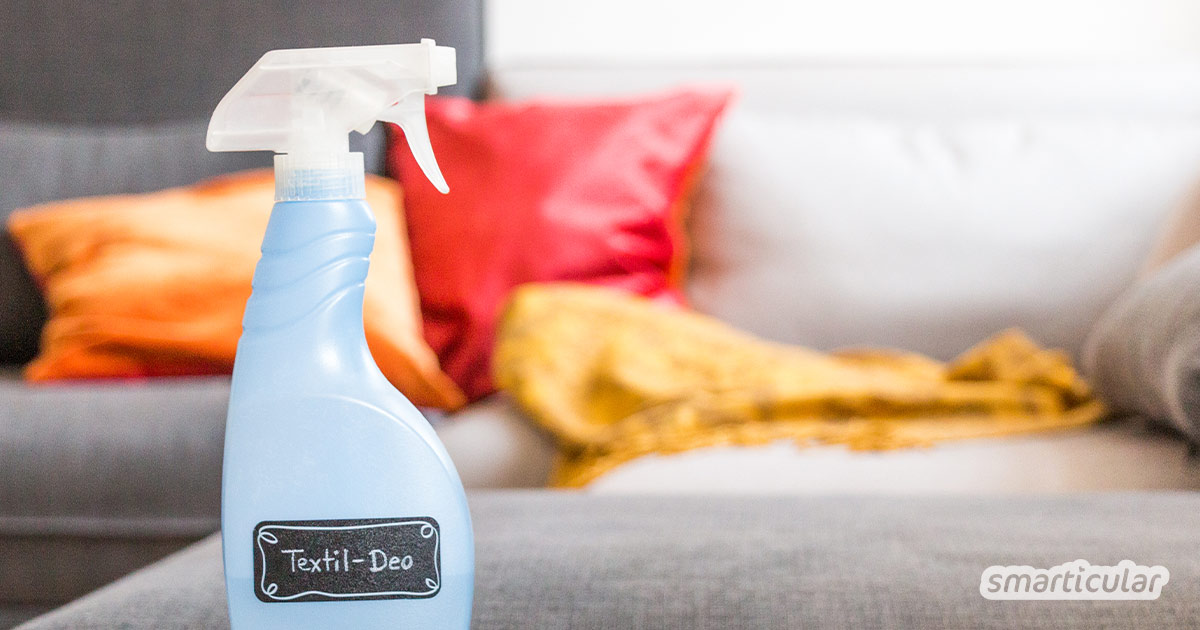 Baking soda for cleaning and cleaning

Fat consists of fatty acids, which, thanks to baking soda, are converted into surfactants and thus detergent substances. That is why baking soda is used, for example, in magic sprays, dishwashing liquid and washing powder, not only to remove odors but also grease and other dirt.

Baking soda reduces scale in water, making the water softer. For example, coffee and tea taste better with soft water by adding a pinch of baking soda to the boiling water. The shells of legumes lose their firmness more quickly in boiling water with baking soda and become more digestible. But a washing machine also has a longer service life with softened water (this works in the same way as water softening with soda) and last but not least, the laundry is softer without any additional products bought ready-made.

Tip: Limescale that has already set in can no longer be dissolved with baking soda; it’s best to use an acidic cleaner like this homemade all-purpose citrus peel cleaner.

Baking soda as an exfoliant and abrasive

A peeling with baking soda stimulates blood circulation and is still gentle on the skin because the grains are not sharp-edged. Coarse baking soda makes an excellent use in an effective scouring powder. On the other hand, fine baking soda powder is better suited as a milder abrasive for toothpowder, which then also neutralizes acids and odors in the mouth.

Baking soda has an antibacterial effect

Most harmful bacteria prefer an acidic environment and are less able or unable to survive in an alkaline environment. For example, baking soda in a homemade deodorant cream containing baking soda reduces the growth of bacteria that are responsible for the unpleasant smell of sweat.

The healing properties of baking soda

Due to its astringent effect, baking soda is suitable for removing water accumulations from the body, for example in the case of swollen legs. To do this, simply mix three to five tablespoons of baking soda powder in a sufficiently large container with lukewarm water and soak your swollen legs in it for 15 to 20 minutes.

In a mouthwash, baking soda has an antibacterial effect and also neutralizes acids in the mouth. As an ingredient in a nasal douche, it helps to restore the normal, slightly basic condition of the nasal mucous membranes if you have a blocked nose. 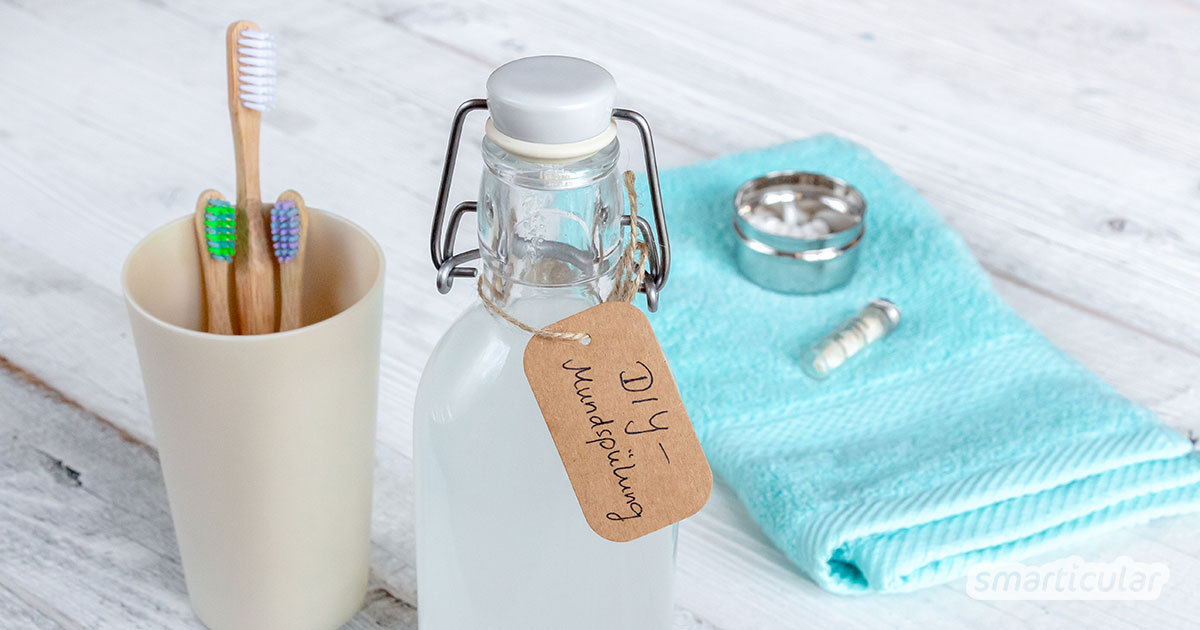 To neutralize excess stomach acid with baking soda, dissolve a teaspoon of baking soda in half a glass of water for acute heartburn. In the case of chronic heartburn, however, it is advisable to seek medical advice as a precaution so that the cause can be treated instead of just the symptom.

Baking soda for almost every purpose

You can make cheap and sustainable household products yourself from baking soda and a small number of other affordable home remedies. These products save a lot of packaging, are very biodegradable and are free of additives that harm the environment.

Are you curious about baking soda? Then you can continue reading our ever-growing overview of how versatile baking soda can be.

Soda in the trade

Baking soda is readily available at drugstores and supermarkets. Depending on the intended use, you will often find it as a Emperor Baking Soda in the food or detergent department. As the main component of Bullrich salt, it is offered specifically for digestion. You can find out what to look out for best when you want to buy baking soda in another article.

Tip: You can also order food-grade baking soda in larger quantities in our shop at low cost.

We have summarized the best uses for baking soda in our book:

How do you use baking soda for household, nutrition, beauty and well-being? We look forward to your tips and suggestions in the comments! 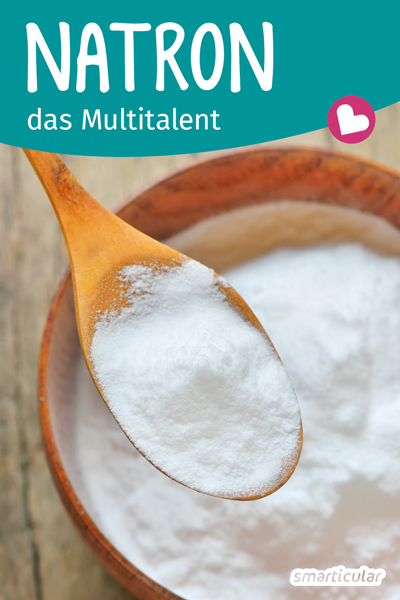