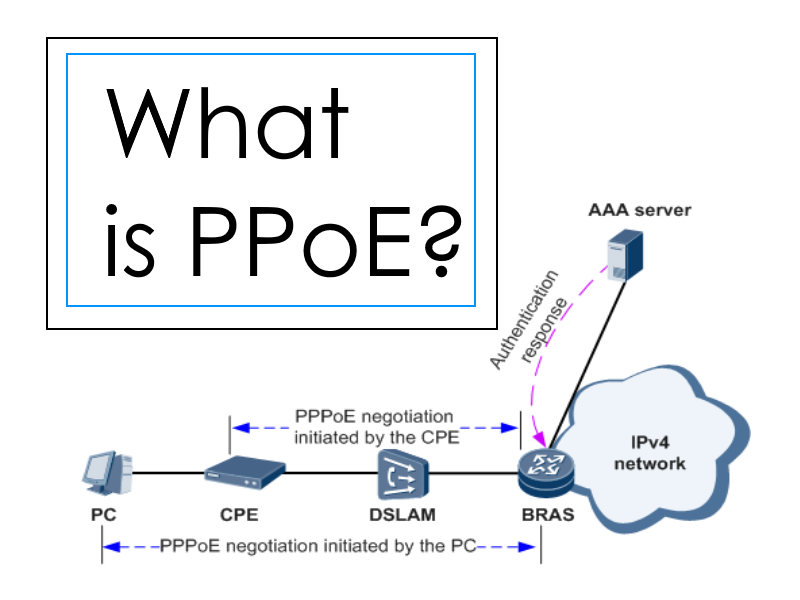 What is PPPoE? PPPoE protocol is a network protocol used to encapsulate “Point to Point Protocol” frames in ethernet frames.

The main uses are: DSL over Ethernet, “DSL Services” and simple “Metro Ethernet” networks that users can connect independently.

Using PPPoE, users can virtually “dial” from one machine to another machine over the ethernet network, and establish a point-to-point connection between them, and secure data transfer over this connection.

Since PPPoE is easily integrated into the dial-up AAA * system today, it has been used primarily by telephone companies.

How and Where Does PPPoE Work?

The transport protocol using the telephone network uses the ATM. DSL modem encapsulates PPP packets into ATM cells and sends them over WAN.

We can be sure that all PPP frames can access the other point since the traditional PPP connection has been established for serial ATMs or virtual ATM circuits already established for dial-up connection between the two end points. However, each node in the ethernet network can access other nodes. Ethernet frames contain the hardware address (mac address) of the destination node. This helps the frames find their destination. Therefore, before exchanging PPP control packets to establish connection over Ethernet, they should know each other’s MAC addresses at two points. So they can “encode” to the control packets. “PPPoE Discovery” does exactly this job. It also helps set up Session ID for future package conversions.

However, PPP is the traditional point-to-point access protocol, naturally PPPoE is now a client-server relationship since multiple users can connect to the service provider from a single physical connection. The Discovery process consists of 5 steps between the internet service provider point and the client PC in the role of client. These steps are listed below.

From Client to Server

PADI is located at the beginning of the PPPoE active discovery. The first package is PADI. If a user wants to connect via DSL, the client must first find the DSL access concentrator (DSL-AC) (server) of the POP point of the ISP. Communication over Ethernet can only be done through MAC addresses. Meanwhile, the computer does not know the MAC address of DSL-AC, it sends the PADI packet via Ethernet broadcast. This PADI packet contains the sender’s MAC address.

-AC-Name-> AC name is kept in the data string, in this example “Ipzbr001” (the Arcor DSL-AC in Leipzig)

From Client to Server

PADR PPPoE passes as request step in Active Discovery process. This packet is sent to the DSL-AC by the client computer in response to the packet (PADO) previously sent by DSL-AC. This package confirms the acceptance of the offer in the PADO package previously sent by the relevant DSL-AC to make PPPoE connection.

From server to client

PADS is passed as a session confirmation step in the PPPoE Active Discovery process. Session ID (Session ID) is published with PADS package approved by DSL-AC with PADR package. From now on, the connection to DSL-AC specified for this POP is fully established.

Last or other end point

PADS is referred to as the termnation step in the PPPoE Active Discovery process. This package terminates the POP connection. This package can be sent by DLS-AC or client.

Traditional Internet access methods, in which computers are connected to the dial-up modem by the user via serial ports, are very slow. PPP is designed to work directly over these serial connections. With the development of broadband Internet access technologies such as ADSL and cable modem, the bandwidth that can be offered to users has seen a noticeable increase. This increase meant that computers with ADSL or cable modem connections on the user side spread through a faster medium such as Ethernet.

The easiest and most cost-effective way to connect many machines is Ethernet. Therefore, scenarios that connect many computers to each other and Internet access device are Ethernet based.

PPPoA is a protocol used for cable modems, ADSL and DSL services. The standard PPP has functions such as user authentication, encryption and compression. In PPPoA, Internet can be accessed over ATM network. Contrary to expectations, the use of ATMs was limited in local networks, and today it is mostly used to establish fast backbone structures between communication and computer networks. High data processing / transmission speeds can be achieved with ATM. The most common standard speeds are 155 Mbps (for HDTV) and 622 Mbps. PPPoA is a network protocol that encapsulates PPP frames into ATM AAL5. It is mainly used in cable modem, DSL and ADSL services. Switching fixed-sized short packets with hardware is much faster than switching variable-sized packets with software (IP packets). Also, since the packages are small, they do not occupy the bandwidth for a long time.

When used as connection encapsulation method in ATM based networks, it provides 0.58% load saving compared to PPPoE. Since it has a lower MTU (Largest Transmission Unit) than Ethernet protocols, it overcomes some of the problems that PPPoE has.

The differences between PPPoE and PPPoA are shown in the table below.

What is PPPoE? Video!

What is a Modem and Router? What are the differences? 2022